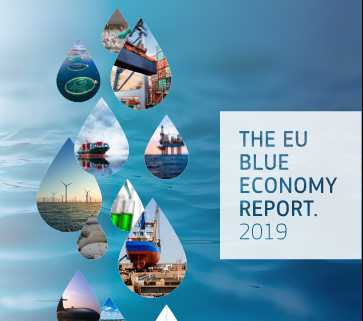 On May 16th,  the European Commission presented the 2019 EU Blue Economy report. An insightful report that underlines, besides that of coastal tourism, the importance of the European maritime industry. The numbers of the blue economy go without saying: the report quotes a turnover of EUR 658 billion, over 4 million people directly employed and EUR 180 billion of gross value added in 2017. What comes out of the report is an industry that is as huge, diverse and old as Europe itself. The strength of the industry is not only the decades of experience and proven craftmanship, it is also the presence of each and every link in the value chain. From shipbuilding and maritime suppliers to shipowners and ports and from research institutes to fishery: they are all crucial to a successful and futureproof industry. As the report shows there are far many jobs directly or indirectly linked to each of the blue sectors. Those sectors are also the foundation of new developments. Without the vast engineering power, offshore wind wouldn’t be so successful.

Without the cooperation between – amongst others – shipowners, shipbuilders and research institutes, we couldn’t build the clean vessels of the future.

The European Network of Maritime Clusters – ENMC – appreciates the EU Blue Economy report issued by DG Mare. It helps in understanding the industry and future developments by having the facts and figures. Our common challenge for the future must be however to go beyond, on one side by showing not only what the Blue Economy has been in the recent past but how it is supposed to evolve in the future, on the other by defining a common ‘blue economy’ language: what do we see as the maritime industry , how do new markets develop and what impact will they have on the blue economy and Europe’s economy as a whole? Having the data – quantitative and qualitative – and explanatory cases on our – digital – desks to steer current and new policies, is vital to strengthen the European blue industry.

The report and relevant data can be found at https://blueindicators.ec.europa.eu/public/